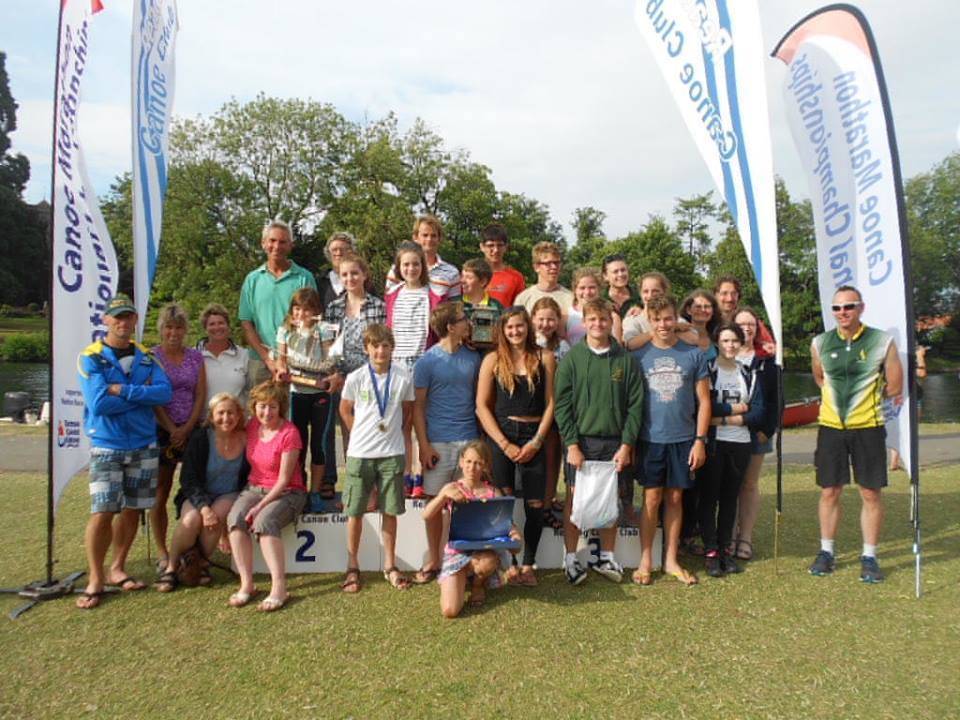 Norwich Canoe Club won the senior team prize for the sixth successive year and the under 12 Lightning team prize for third year out of the last four to make it another impressive Nationals Marathon weekend in Reading and underlying once again the remarkable strength in depth of Norwich as club paddlers won medals in almost every category from under 12 to over 64. The Sunday K2 day was arguably the most successful day in the clubs history.

Leading the way to become National champions in both K1 and K2 were?Luke Shaw?in the under 16?s and?Tim Pendle?in the senior men. Luke?s K1 performance dismantled the field and meant that he came in well ahead of everyone else in his category. His K2 race was all together closer and in an exciting finish he became National Champion K2 with?Sam Drane?snatching it on the line.

Tim Pendle appeared in control of a senior men?s K1 race that developed into a front group of three and when it came to the final sprint he was able to leave the other two behind and win by around two lengths. On the Sunday he teamed up with Ed Rutherford of Elmbridge and once again outsprinted his nearest rivals after an hour and forty minutes on the water.

There were many other excellent K1 performances. Dan Sklenar had a very close race in the under 12 Lightnings just being pipped for the title by inches on the line and winning a silver medal.?Flo Duffield?finished just outside the medals in 4th in the under 16 girls after slightly misjudging the last potage.?Fiona Grady?won a gold medal in the over 39 womens K1.?Dyson Pendle?did two races on the Saturday coming second in the over 54 K1 and 4th in the over 49 K1.?Ali Pendle?won a gold medal in the over 54 K1 race to add to her European title. Ben Want fell in in the under 14 boys races at the start but got back in to finish and Eloise Roghi took on the under 16 girls race which was a great achievement in itself. Both these paddlers and many more performances like them from others encapsulated the club spirit and teamwork that led to the clubs success.

Sunday were all the K2 races and the day started well with an imperious victory for Dan Sklenar and Billy Hall in the Hody K2 paddling with great technique and control to see off the opposition in style.?Harry Shearer?won an excellent silver medal in the under 18 boys K2 paddling with David Hatton from Chester and in the same race?Kieran Hayward?snapped his paddles at the start and did remarkably well to catch the race and overtake three crews after waiting 5 minutes for a replacement set.?James How?and Tim?Timothy Dowden?won a bronze medal in the under 16 boys K2 staying with the top group right to the end. Florence Duffield paddling with Bronte Holden from Fowey won the Girls under 16 K2 race by 3 minutes . Dyson Pendle and?Ian Hayward?won the mens over 44 K2 with Ian stopping off at Reading just long enough for the race on his way back from Jersey and on his way to Spain and Julie Hicks and Caroline Banson won a bronze medal in the women?s race with Coral and Ali coming in behind them in 4th. There was also a bronze medal for Clifford?Clfford Lee Smith?and Chris Sharp in the over 64 race and yet another medal for Tim Pendle racing in the mixed with?Phoebe Antonia Ayres?? this time a bronze.

There were many other remarkable performances too.?Stacey Terryachieved 7th in the mixed race with James Escott of Bradford out of a start of more than 50 boats. Sofia Groves and Alis Roghi were 5th and Grace Anderson and Gaby Ede were 6th in the girls under 14 women race and they can both race in that category next year. Kieran Smith and Daniel Sklenar were just outside the medals in the under 12 K2. Robert Green was one of the paddlers that did four races over the weekend. Albert Hicks broke his rudder but still finished in his K1 and then went on to do another two races on the Sunday.

And the small but powerful Lightning Team of Dan, Daisy, Billy, Rory, Edith, Kamila and Lewis all showed great spirit and determination epitomized by Rory and Daisy?s K2 in the under 10?s – the 7 of them went on to win the team title.

Everyone who raced scored points for the club so it was a complete team effort and the success was achieved as much by those who have not got a mention in this report as those that have.

So congratulations to everyone involved in the team at Reading whether paddling or supporting and also to those who were back at the club running the Saturday session and the kitchen.

Good luck to those racing at the World Cup in the coming week and those that are off to race in Spain in the Sella in two weeks.